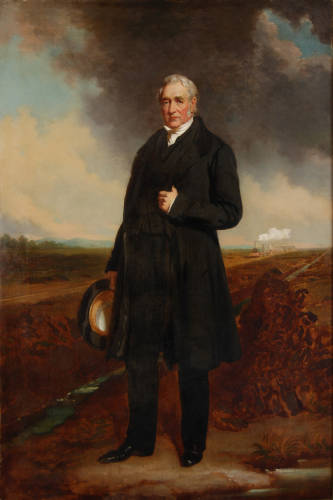 George Stephenson (1781-1848)
1st President of the Institution of Mechanical Engineers.

Renowned as the ‘Father of the Railways, George Stephenson was born in Wylam, Northumberland in 1781. He followed his father into the local coal mines, beginning his career as assistant fireman to his father. Ambitious, although not educated, Stephenson was technically able and prepared to learn. While working as engine-wright at the Killingworth Colliery, he invented the miners’ safety lamp which he tested by taking it into a particularly volatile region of the mine; although the experiment was risky, he emerged safely. After some dispute as to whether the lamp was invented first by Stephenson or by Sir Humphrey Davy, who claimed the £3,000 reward on offer, a sum of £1,000 was raised and presented to Stephenson by North-eastern industrialists.

Most famous as a railway pioneer, Stephenson had watched developments in the area of steam locomotion with interest, and from 1815 onwards, carried out key experiments and developments at Killingworth wagonway. By 1818, the wagonway had been entirely re-laid with cast-iron edge-rails developed and patented by Stephenson in cooperation with the iron-making firm of Losh, Wilson and Bell. By 1820, when the line was replaced with wrought iron track, haulage by horse had virtually disappeared at Killingworth.

In 1821, Stephenson was appointed engineer to the Stockton and Darlington Railway, the first passenger railway in the world. Here he fought hard for the use of steam locomotives over horse-power, at the same time establishing Robert Stephenson & Co. to supply locomotives and other steam engines. Four winding engines and a steam locomotive were delivered to the Railway by the time it opened in 1825, and Locomotive No.1 hauled a fully loaded train along the line at the opening.

After his success at the helm of the Stockton and Darlington Railway, Stephenson was invited to assist with other railway schemes, most importantly the Liverpool and Manchester Railway. Opposition from local farmers and landowners meant adequate surveying could not be carried out, and a parliamentary bill was rejected in 1825. A bill of 1826 was more successful, and Stephenson was appointed engineer. Whether to use fixed or locomotive engines was fiercely debated, and the Rainhill trials were held in 1829 as a test of the locomotive power advocated by Stephenson. A prize of £500 was offered to the winner. Of the four competing engines, Stephenson’s, the Rocket, was pronounced the winner after running 12 miles in 53 minutes. The line officially opened the following year.

For the next fifteen years, George Stephenson was involved in most of the railway schemes of the time. An important result of Stephenson’s involvement, and his vision of a national, unified rail network, was the adoption of a standard gauge of rail spacing.

He retired in 1845, and in 1847 became the first President of the Institution of Mechanical Engineers. He died in 1848. Stephenson’s support for the fledgling Institution in the last year of his life was a final and lasting legacy to his chosen profession.