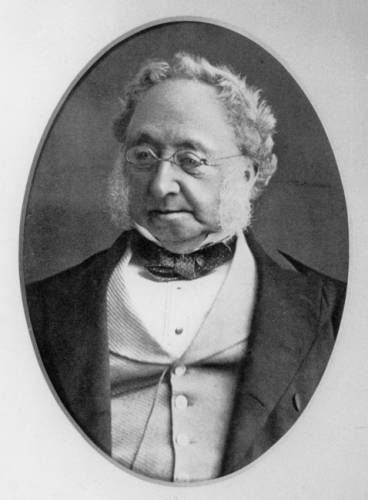 12th President of the Institution of Mechanical Engineers

Hawksley was born at Arnold, near Nottingham, England on 12 July 1807. Educated at the local Grammar School, he was articled to an architect and surveyor, Mr. Staveley, in Nottingham: he became a partner in the business before leaving to work in London in 1852.

Hawksley is best known for his work in water engineering. He pioneered the supply of clean water for Nottingham as early as 1830, going on to engineer the supplies of Liverpool, Sheffield, Nottingham and many other growing urban industrial sites. The Dictionary of National Biography states that ‘there is scarcely a large city in the kingdom which did not make use of Hawksley’s services at one time or another’. In conjunction with Lord Armstrong, he invented a self-acting valve to regulate pipeline flow.

Hawksley was also a gas engineer, again advising on the supply for large cities. As a gasworks manager in Nottingham during the Chartists’ protests, Hawksley is said to have defended his charge by rigging up home-made gas flame-throwers.

Hawksley was elected a Fellow of the Royal Society in 1878, Britain’s highest scientific honour. Hawksley dies in 1893 and his son, in memory of his father, initiated the Hawksley lectures from 1913.

The Thomas Hawksley lecture and medal is one of the most prestigious events in the annual calendar of the Institution. The Thomas Hawksley Fund was established by Charles Hawksley, Member of Council, to commemorate the centenary on 12th July 1907 of the birth of his father, the late Thomas Hawksley. In 1913, it was decided to use the gift to fund an Annual Lecture on the subject of mechanical engineering. The first “Thomas Hawksley” Lecture was presented to the Institution on 5th December 1913 by Edward B Ellington, an expert in hydraulic engineering and a past president of the Institution. He took the subject of “Water as a Mechanical Agent” for his presentation. The lecture was presented at the Institution’s headquarters and then repeated in Birmingham, Leeds, Liverpool and Nottingham, all the towns that had benefited by the engineering work of Thomas Hawksley. Famous figures who have presented the lecture include H L Callendar who published the first steam tables, F W Lanchester, the internal combustion engine pioneer, Harry Ricardo, one of the foremost engine designers and Sir Noel Ashbridge, the broadcasting engineer.