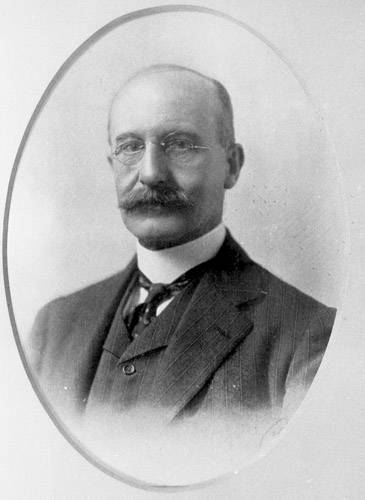 32nd President of the Institution of Mechanical Engineers

Donaldson, son of the first Premier of New South Wales, was born in Sydney, Australia on 7 June 1856. He was educated at Eton and Trinity College, Cambridge, followed by a technical education at the University of Edinburgh. Between 1875 and 1877, he served an apprenticeship at the London and North Western Railway Works, Crewe. For the following two years, he received further technical training at Zürich and Cambridge.

In 1880, he was employed on Parliamentary work and as engineer in charge of the construction of the Burnley tramways. He was also an executive engineer on the West of India Portuguese Railway and Harbour, as well as the harbour works at Goa. In 1887, he returned to England and was appointed engineer in charge of the No. 1 section of the Manchester Ship Canal, including construction of entrance locks, estuary banks and heavy piling work.

After a short period of private engineering practice, he was appointed Engineer-in-Chief of the London and India Docks Joint Committee. He held this position for almost five years, after which time he was appointed Deputy Director-General of Ordnance Factories, Woolwich, under Sir William Anderson.

In 1915, at the request of Lloyd George, he temporarily gave up his position in order to act as Technical Advisor to the Ministry of Munitions. He frequently accompanied the Minister of Munitions on visits throughout the country, and it was in this capacity that, in 1916, he was visiting Russia in the staff of Lord Kitchener, when the boat on which he was travelling, the H M S Hampshire, hit a mine recently laid by a German U-Boat, sank off the Orkney Islands.