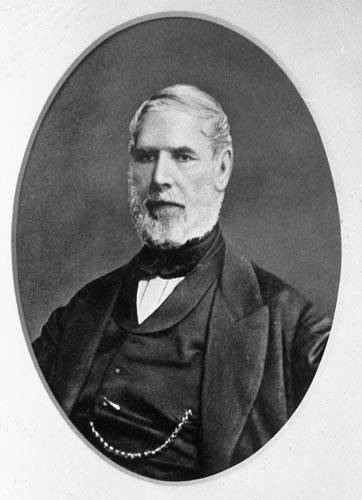 6th president of the Institution of Mechanical Engineers

Kennedy was born in Gilmerton, near Edinburgh, Scotland, in 1797.

He was apprenticed at 13 to a millwright near Dalkeith, where he remained for five years. He spent some years working as a millwright, and working with winding and pumping engines at several places, before moving to Lavenoch Hall, near Hamilton, where he was employed to erect pumping and winding engines of his own design.

He later constructed direct-acting marine engines, one of which was for the S.S. Emerald Isle, which belonged to the St George's Steam Packet Co, Liverpool. He then travelled to Liverpool to supervise its installation. While in Liverpool, he met George Stephenson, who was then establishing a locomotive works at Newcastle-on-Tyne. He was appointed manager of these works in 1824. While in this position, he constructed two pairs of winding engines for use on the Stockton and Darlington Railway, and planned the first three locomotives for the opening of the railway in 1825.

He left Newcastle for Liverpool at the end of 1825, where he undertook the management of the works of Mather and Dixon. He then became a partner in the firm of Bury, Curtis and Kennedy, who constructed locomotive, marine and stationary engines. The company made locomotives for a number of railways, including the Manchester and Liverpool, Leicester and Swannington and London and Birmingham.

He was a Member of the Institution from its formation in 1847.