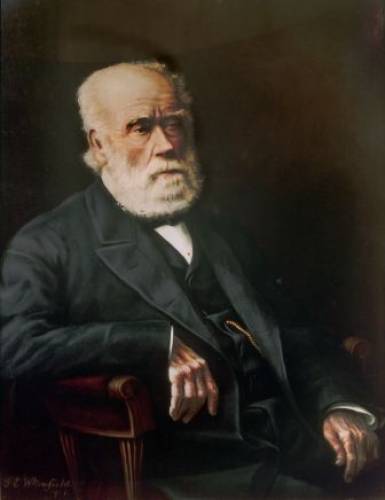 4th President of the Institution of Mechanical Engineers

Whitworth was born in Stockport, then a small manufacturing satellite of Manchester, England. His father’s work as a frame-maker for the cotton industry must have given the young Whitworth early experience of industrial machinery. He was apprenticed to Manchester companies building mill pumps and textile machinery. At the age of 21, Joseph Whitworth had decided to seek employment in London. He travelled by barge, and along the way fell in love with and married Fanny Ankers, a bargemaster’s daughter.

Once arrived in London, in May 1825, Whitworth joined the works of Henry Maudslay. Maudslay was the father of the modern machine tool and his engine-building factory was a hotbed of engineering talent. Bryan Donkin, Joseph Clement, Isambard Kingdom Brunel and James Nasmyth all served time there. Whitworth worked in the relatively humble position of bench fitter because ‘he wanted to attain perfection’. Maudslay’s tools were then as close to that state as an aspiring engineer could hope to get.

Whitworth added to his experience with Holtzapffel and Company in 1828 and Joseph Clement in 1830. In five years, Whitworth had managed to serve the best machine makers that London could offer. Clement especially was far in advance of his commercial rivals and hi work on constructing Charles Babbage’s ‘Difference Engine’, or mechanical calculator was the most intricate and difficult commission then given by the Government. Whitworth worked on components for this farsighted but ultimately doomed project. For the aspiring engineer, it must have given profound insights into the levels of precision that might be attained.

Joseph Whitworth returned to Manchester to set up business on his own in 1832. He took premises in Port Street, then created a workshop at 44 Chorlton Street. The works began well, with Whitworth’s first independent patent lodged in 1834 – a machine for turning and screw cutting studs and hexagonal bolts. Before this, nuts and bolts were threaded by hand, an inaccurate and relatively expensive procedure. This patent set the pattern for a series of inventions and improvements to machinery and tools which would revolutionize manufacture.

Whitworth’s work built on that of Maudslay and others but introduced far more fundamental thinking into the problem of producing accurate machinery. A good example was his work in making a true surface by scraping and comparing three matching planes. From these apparently simple ideas came the accuracy and method for which Whitworth became so famous.

In succeeding years, Whitworth built his business on accuracy and measurement, the gathering of engineering data and the standardisation of Whitworth Company output. It had been stated in 1830 that a fitter who could work to one sixteenth of an inch was a good workman. Whitworth’s measuring machines were capable of accurately measuring up to one two-millionth of an inch. These machines allowed him to produce standard measures and gauges. Uniformity was extended to the still famous Whitworth system of thread screw threads, commenced in 1841 and universally accepted in Britain by the 1860s. His machines for drilling, planing, slotting and shaping metal eventually formed part of the 1851 Great Exhibition displays, where over 20 of his machine were judged to be ‘of first-rate excellence’.

As a result of this recognition at the Great Exhibition, the British Government consulted him on means of improving army weaponry. During the Crimean War, British army guns had proved hopelessly outdated. From 1854, Whitworth experimented to determine the best form of weapons and ammunition. Using a shooting range in his garden at Fallowfield, near Manchester, he eventually settled on the use of .45 inch elongated ammunition of rapid twist fired from a hexagonal rifle barrel. The War Office rejected the weapon, but many of its features became a standard for accurate small arms.

He was no more fortunate in the production of heavier weapons. By 1862, he had developed artillery with a range of over six miles. Again, the War Office rejected the improvements. Whitworth had much more success with his manufacture of guns for private use – even Queen Victoria was induced to fire a Whitworth rifle. The work led to Whitworth perfecting the process of the hydraulic forging of gun steel.

In 1856, Joseph Whitworth became the fourth President of the Institution of Mechanical Engineers. He was by now widely respected and influential, and he lost no time in promoting engineering standards within the Institution. Membership rose rapidly under his guidance and he was elected for a second term of office in 1866, the first individual to have served two separate terms as President. His great gift to the nation, £100,000 to found the Whitworth Scholarships for engineering, was announced at an Institution meeting in 1868 where it was acclaimed as ‘meeting the wants of the present age’. More than a century after his death, Whitworth’s legacy continues to meet the education needs of succeeding generations.